Look. I don’t need help getting my kids to eat pancakes. Or smoothies, or apple slices, or whatever else shit you wanna make look like a race car or a wee mousie. I want my kids to eat REAL HUMAN PERSON FOOD and also develop a basic grasp of food preparation. Here are fifteen cookbooks marketed for children that succeed and/or fail to varying degrees in this endeavor. 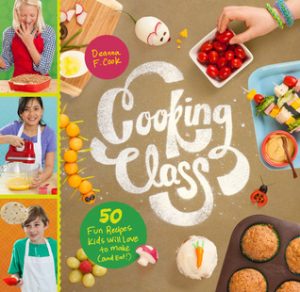 COOKING CLASS: 57 RECIPES KIDS WILL LOVE TO MAKE AND EAT BY DEANNA COOK

On the one hand, you’ve got recipes for granola bars that are just sugar, honey (which is a sugar, you’re not fooling anyone), vanilla, oats, and chocolate chips (hello that is also a sugar), but on the OTHER hand, it does you the honor of assuming your kid will eat gorgonzola cheese. It also has recipes for things like sushi! Or fish tacos! Or peanut noodles! These are actual food!

These recipes are for a more advanced child-chef, for sure, and it largely depends on whether the inclusion of a bacon-dandelion salad is a pro or a con in your books. It’s pretty heavy on desserts, but at least they’re actual desserts you’d serve to guests and not just like vanilla custard with chocolate chips in the shape of a face.

PURCHASED THIS ONE FOR MYSELF. There’s a section on why fruits and veggies are good for you, it relies a lot on dried fruit for sweeteners, suggests full-fat plain yogurt for your smoothie (full-fat dairy is a hill I will absolutely DIE on), and includes recipes for, like, jambalaya and shit. Their pesto pasta is now on regular rotation in our house.

This includes recipes from Mexico, France, Italy, Japan, the Middle East, and Africa which it ACTUALLY RECOGNIZES as being enormous and varied and so includes sample recipes from Algeria, Monaco, Ethiopia, Kenya, and the Ivory Coast. Each section has sides, mains, and a dessert, which is reasonable af.

While the IDEA of a 3-ingredient recipe sounds fun and child-friendly, what the heck darn are you on about with this “banana, orange juice, sweetened condensed milk” shit, that isn’t a recipe, that is three kinds of sugars mixed together (sugar is the other hill on which I will die, never make me choose). It’s full of charming illustrations but no actual pictures, and like fuck a drawing of a dish, I wanna SEE it. All in all, this is a CONCEPT but fails in execution. 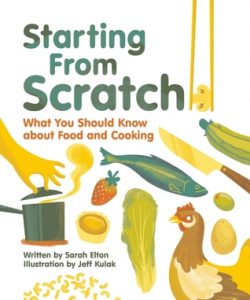 STARTING FROM SCRATCH: WHAT YOU SHOULD KNOW ABOUT FOOD AND COOKING BY SARAH ELTON

I read this aloud to my kindergartener as a chapter book—for my kids, knowledge is half the battle. This is an excellent little primer about how food works in the body, how heat applied to food changes its properties, when it’s appropriate to make substitutions in recipes and how to go about it. That kind of thing! Not a cookbook as such, but a marvelous resource if your kid is a little information hound.

This is a pretty slap-dash attempt to toss one meal each from a handful of cultures into a book. The pages are extremely busy and difficult to follow.

I’m not super sure how this book means to organize itself (there’s like a Restaurant Menu section but then a Kitchen Specials section and they don’t seem appreciably different) but the entire latter half is desserts and ok frankly that’s not what I’m here for.

GARDEN TO TABLE: A KID’S GUIDE TO PLANTING, GROWING, AND PREPARING FOOD BY KATHERINE HENGEL

This is such a neat little project book! It follows six herbs and vegetables (basil, potatoes, green beans, carrots, lettuce, and tomatoes) from seed to harvest, with gardening instructions, and several recipes for each item.

SUSHI FOR KIDS: A CHILDREN’S INTRODUCTION TO JAPAN’S FAVORITE FOOD BY KAORU ONO

Three parts child-friendly history of sushi as food, one part how-to. I know I said earlier that illustrations are garbage but that was of RECIPES and this is of PEOPLE DOING SUSHI-RELATED ACTIVITIES and they are gd adorable. 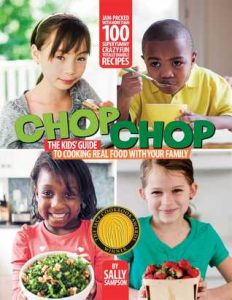 CHOPCHOP: THE KIDS’ GUIDE TO COOKING REAL FOOD WITH YOUR FAMILY BY SALLY SAMPSON

This is another good one! It provides tasting experiments, which are a non-threatening way to get your kid to try new flavors without the stress of it being The Meal, it features POC and children with disabilities in its recipe photos, has healthy and minimalist recipes—build your own pasta salad, white bean dip, that kind of thing—and desserts like baked apples, which I would actually feed my kids regularly.

This provides one recipe each from nineteen different regions of the world. There’s a quick description of each locale, a proverb about food, and bright photographs. The authors provide a vegetarian option wherever the recipe has meat.

This is a handful of very basic recipes like hummus, tofu skewers, baked potatoes with bean chili, that sort of thing. Super useful for vegetarian families BUT ALSO for conveying the idea that meals can be meatless and still be meals.

KITCHEN FOR KIDS: 100 AMAZING RECIPES YOUR CHILDREN CAN REALLY MAKE BY JENNIFER LOW

Nope there are like ten recipes that aren’t some kind of sugar cookie or a cheese bread.

OH MY GOD COOKING AND SCIENCE. Each recipe is a “learn about X concept” (the chicken fingers one is “learn about bacteria” and I am like, Indeed), there are comics in it, the recipes aren’t super INNOVATIVE but that’s not really what I’m here for, and it does include like empanadas and sushi.